Galapagos Islands – face to face with a Giant tortoise

Where else in the world can you walk next to the Giant tortoise, share a beach spot with sea iguanas, and contemplate the sunset in shorts, next to a bunch of dwarf penguins?

If/when I have a kid, I will have a couple of life wisdom I plan to share with him or her that I already know about: start saving money early, carry a healthy lifestyle, and go to Galapagos Islands to see the mother nature at its best. So, he/she can experience the magical moments I mentioned above; in one of the most magical moments, I’ve had in my life.

Galapagos Islands. From Quito to Baltra

I hired a tour to Galapagos directly when staying in Quito Ecuador. All-inclusive, minus the plane ticket. Obviously, I would advise if you decide to go on a tour to book in advance. If you have more time or are on a budget, I would advise you to use google and prepare the trip by yourself. That will allow you to end up paying less than all-inclusive tours.

My trip started going from Quito, Ecuador, to the Island of Baltra; one of the two islands you can fly to from mainline Ecuador. Worth mentioning for your planning, that there are no international flights to Galapagos. My flight was with the airline TAME Airlines*; although there are other options such as Avianca, LATAM, etc. It’s a +2-hour flight with a stop in Guayaquil (Ecuador’s largest city). Prices are ranging from 300$ to 400$ depending on the time of the year you go.

* side note: On May 20, 2020, the Ecuador government decided to cease all the operations and liquidate the airline

The plane lands in an old US military base from WWII, converted now into a cosy little civilian airport. Once you pass the controls on the island, you’re advised by the local personnel to wait at the main gate for the busses that will take you to the ferry. By ferry, you will get to Santa Cruz Island, which hosts the town of Puerto Ayora. It is one of the main stop points you must make when in the Galapagos. There was also my first hotel located there.

Only once at the airport gate, I did realize that the buses we are waiting for are not exclusive to us people travelling with a tour; but are aimed at the general public. 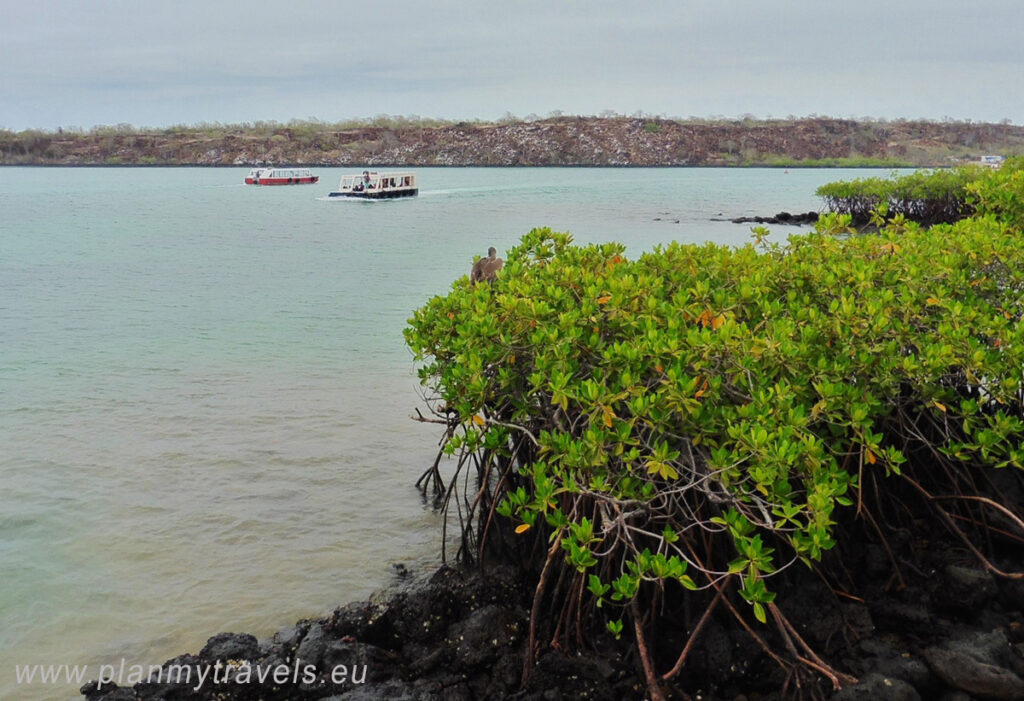 The landscape looks very dry and arid. The rocks look as if you had landed on another planet. As I’m looking around to avoid making eye contact with fellow tourists I see the bus in front of bus stops, and then our bus stops as well. What’s going on? There’s no traffic since there are not many cars in the whole of Galapagos.

I come to realize the reason why we stop. Is that a group of sea iguanas hanging around the main road? Therefore,  the bus drivers kindly stopped for the delight us tourists to see these small black-lava coloured creatures. These iguanas look out of this world too, and they, in fact, inspired the swimming creatures from the Alien movie franchise. Charles Darwin himself chose to call them “imps of darkness”. More fascinating than Hollywood-related trivia is once you learn that they are the only iguanas on the entire planet that dive and function underwater. They exist “only in the Galapagos Islands”.

This will become a recurrent theme during the trip. You’ll see plenty of “only in the Galapagos Islands” creatures and situations.

Once arriving at the ferry, the transfer from Baltra to Santa Cruz was quick. It took about 15 minutes. Once at the other side the tour operator apologizes as we’ll have to wait for fellow passengers from the tour that were somehow delayed. All I can do is walk around the parking lot of the ferry station. Normally this would be a situation to not enjoy but doesn’t take long to realize the shallow clear water makes perfect conditions for a natural aquarium experience. Colourful tropical fish, wall climbing crabs, and exotic birds make the whole waiting experience a pleasant memory.

Once in Puerto Ayora, we stopped at the hotel to drop off our luggage, and almost immediately the first activity started: visiting the Charles Darwin Station. It is a natural reserve/natural museum.  You can learn there about the natural preservation efforts of the scientific community on the island.  You can also learn about their efforts to maintain the equilibrium of this natural treasure unique in the world. An equilibrium, so delicate that maybe future generations won’t be able to enjoy it anymore (thus hope for my kids they still get to see it the way I got to see it). And at Charles Darwin station we got to see our first Galapagos giant tortoise. As much as you picture them to be big, they are bigger.

After visiting Charles Darwin station, we had the afternoon free, so walked around Puerto Ayora and its beautiful beaches. While at it, we ran into another group of sea iguanas. We started taking enough selfies next to them, to grab this one-in-a-trip chance. We noticed locals ignored the iguanas but were friendly to us. After walking some more around the beaches we realized that the sea iguanas are everywhere. No reason why the locals didn’t mind them. Also remarkable is how the iguanas are not afraid of you. Later we learned that people in Galapagos grow up knowing how to respect animals. All tourists are therefore advised to not disturb them. And the animals are remarkably not afraid of humans and don’t feel threatened by us.

Walking further into the town itself we see a group of people photographing a fisherman’s dock. A fisherman had arrived and was starting to clean the fish. This had attracted not only the tourists but a group of sea lions and gigantic pelicans.

The sea lions reminded me of my dog when I’m eating something that she likes and I’m negating it to her. The sea lions were trying to get the attention of the fisherman. And they were waiting patiently until he would throw them something. Not before the pelican was trying to grab the pieces of fish first.

This show was happening as a tourist teen didn’t get the memo that she shouldn’t get a selfie too close to the pelican. And so, the pelican scared the hell out of her by almost biting her in the arm. Everyone was laughing, except for her and her family which did get scared at such an angry bird.

At night, after dinner in our hotel – we went out to walk and see what the local life looked like. About 20 min. walk from our hotel, quite close to the city centre we ran into the Muelle de Puerto Ayora.  It is a dock where we saw the local families and local teens would go to hang out. Next to the dock, there are parked boats. We see sea lions which are so used to people they don’t mind you take photos of them from a meter or so distance. This walk turned out to be extremely entertaining and without really expecting it.

Finally walking deeper into the dock we see families looking into the water and pointing. Kids looking in awe. This night we are lucky! We see plenty of sharks, manta rays, and other tropical fish I can’t identify, passing by swimming close to the surface. The first day without much efforts turned into one of the most amazing experiences I’ve had in years. It’s like Sea World aquarium only than natural, in the open air, and with animals that you will see “only in the Galapagos”.

Depending on the reception of this post I may post my next days in Galapagos. I saw their penguins, swam with sharks and walked to a volcano crater. I also visited a farm with gigantic tortoises in their natural habitat.

Travel documents must be well checked before each trip. Worth knowing if you need to have a health declaration form, e-visa or any other travel document.

This site uses Akismet to reduce spam. Learn how your comment data is processed.